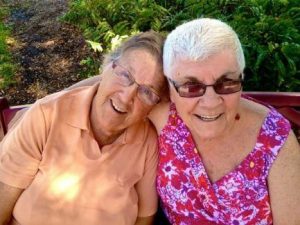 It is with a heavy heart that we must announce the passing of an LGBT Legend & Icon Constance (“Connie”) Kurtz
Connie passed away on Sunday evening, May 27, 2018, in West Palm Beach.
Connie and her wife, Ruth Berman, were simply known as “Ruthie & Connie”. They were together for over 44 years. They first met in the late 1950’s. After 2 divorces, they became a couple in 1974.
In 1988, Ruthie & Connie sued the New York City Board of Education for “Same-Sex Healthcare Benefits”. As their case was being tried, they appeared on “The Phil Donahue Show”; coming-out-of-the-closet in front of millions of people watching T.V.
In 1996, they were victorious in their law suit.
In 2002, they portrayed themselves in the documentary film; “Ruthie & Connie: Every Room In The House”. Shown at film festivals the world over, the film won 6 “Best Documentary Film” Awards.
In 2016, the organization known as “Services & Advocacy For GLBT Elders” (SAGE), presented “The SAGE Pioneer Award” to Ruthie & Connie.
In 2017, Ruthie & Connie were presented “The Rusty Gordon Spirit of Excellence & Equality Award” at the annual TKJ Gala of the Palm Beach County Democratic Party.
Recently, Ruthie & Connie were named “HONORARY LIFETIME MEMBERS” of The Rusty Gordon LGBTA Democratic Caucus of Palm Beach County.
Earlier this year, the PBC Chapter of ‘The National Organization For Women’ (PBC-NOW), presented Ruthie & Connie with: “The Rusty Gordon Human Rights Award”.
Ruthie & Connie were married on July, 26, 2011, in New York City.
Together with Ruthie, Connie was “The Ultimate Activist & Advocate” on behalf of the Women’s Movement (NOW), the LGBT Community, and the Democratic Party.
Connie was the former president of “The United Democratic Club of Century Village, West Palm Beach”.
The Legacy that Connie Kurtz leaves behind, speaks volumes, and Connie WILL BE GREATLY MISSED.

Fighting for Access to Abortion for over 50 years. We believe in Inclusive and Intersectional Activism ✊🏻✊🏼✊🏽✊🏾✊🏿 JOIN THE FIGHT NOW!

We Roe'd the #vote like you asked us to.

We delivered for you. Now please deliver for us. Constitutional #equality. @POTUS @SenSchumer @TheDemocrats

We Understand That The Constitution Is Outdated and Was Created Under Different Times, But That Does Not Mean That Women Should Not Be Added In And Protected Under The ERA.

Land of the free they say...

Florida NOW’s purpose is to take action through intersectional grassroots activism to promote feminist ideals, lead societal change, eliminate discrimination, and achieve and protect the equal rights of all women and girls.

Learn more about us.