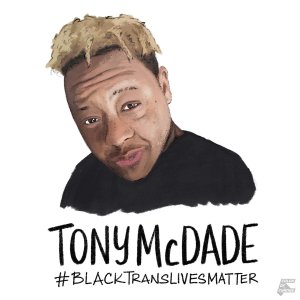 TALLAHASSEE, FL – In a recent article written by reporter Robbie Gaffney and published by WFSU, a member of the Mayor of Tallahassee’s LGBTQ Advisory Council, Janel Diaz stated: “We have to call a spade a spade… Tony was profiled as a black man. It is what it is. They didn’t say, you know, the police did not pull out their guns to say ‘oh that’s a trans man let’s kill him. He’s part of the LGBTQ community. Oh let’s kill him.”

Diaz’s statement shows a clear misunderstanding of how transphobia and anti-blackness intersect to perpetuate police violence. Whether or not the Tallahassee Police Department knew Tony McDade’s gender identity when they killed him does not dismiss how his gender identity impacted his relationship to police violence. Tony’s entire life, which he led as a black person and as a trans person, placed him at a disproportionately high level of violence from his white and cisgender peers. Council member Diaz’s dismissal of McDade’s trans identity as the reason why he was targeted by the Tallahassee Police Department is unwarranted, groundless, and factually misleading, which plays right into the transphobia that caused the murder in the first place.

According to a recent study done by the National Center for Transgender Equality (2019), “58% of transgender people who interacted with law enforcement in the last year reported experiences of harassment, abuse or other mistreatment by the police” and that rate is much higher for trans people of color. Furthermore, to place McDade’s identity as a trans person as secondary to his identity as a black person is false and misleading. It dismantles the lived reality of police violence, systemic racism, and transphobia, and places identity categories into silos where they don’t belong. Diaz’s misunderstanding of the lived intersection of both identities makes the reality of racist, transphobic police violence superficial and one-sided. It undermines the lifelong, deep-rooted affects of racism, transphobia, and police violence on a single individual’s life. It minimizes the distress and pain black trans people experience because they are constantly at higher risk of police violence, hate crimes, and systemic discrimination in the areas of employment, housing, education, and public accommodations.

The statistics are real. According to a report released on June 4th, 2020 by the Anxiety and Depression Association of America, Black people are known to have a 20% percent higher rate of experiencing psychological distress than their white peers and Blacks exposed to violence (as Tony was) are at a even greater risk of suffering from PTSD. According to the UCLA School of Law Williams Institute (2019), “transgender adults have a prevalence of past-year suicide ideation that is nearly 12 times higher, and a prevalence of past-year suicide attempts that is about 18 times higher, than the US general population” due to the high rates of trauma caused by discrimination, rejection, and bullying. Rates of mental illness, substance abuse, depression, and anxiety are also much higher for transgender people than cisgender people for the same reasons.

Tony had to experience the daily trauma of living at the intersection of being Black and being trans his entire life. The harsh beating he received the night before his death is depictive of this – as was the unjust treatment he experienced in the criminal justice system. To understand why Tony was in a confrontation with the police, one needs to understand all the contributing factors: bias, racism, transphobia, lack of support for people of color (POC), and a history of trauma that is perpetuated by social systems, educational systems, criminal justice systems, and law enforcement agencies in Tallahassee and nationwide.

As a community, we respect and uplift the McDade family, especially his mother, in their grieving process. No one should have to lose a child simply because a police officer decided to murder them due to fear and profiling. However, we also realize the parents of transgender people often have conflicting ideas about the validity of their child’s identity. A transgender person’s relationship with their pronouns, and with whom they disclose, is up to them. Including whether or not they disclose to their parents. Unfortunately, Tony’s life was cut short by police violence and we will never know how his identity process would have played out. Part of the tragedy of Tony’s murder is that he was murdered for being who he was as he was coming to terms with how to express that within the complex, and often unaccepting, social system which he lived.

Finally, transgender people are always the sole deciders of what pronouns they use, and with whom. This situation was complicated by Tony’s untimely death. Diaz’s statement that, “That mother don’t have to say anything or appease anybody because that was her child,” utterly fails to address the real issue here. Tony McDade, especially in death, is the only one who decides who Tony McDade is. On Tony’s social media accounts, and to his chosen family, he identified as Tony. For media outlets and the Mayor’s LGBTQ Advisory Board to think that they can use his complicated relationship to his family as a deflection of their own deadnaming, misgendering, and callous lack of care for who Tony wanted to represent himself as, is wrong.

As a collective of transgender, non-binary, queer, black, brown, cisgender, and white organizers for justice, Tallahassee Community Action Committee is shocked and disappointed by the lack of thought Mayor Dailey’s LGBTQ Advisory Board put into their statements on Tony McDade. Trans people, whether in life or death, deserve to be given the same standards of respect and dignity as everyone else. We will fight to defend this and we continue to demand #JusticeForTony because #BlackTransLivesMatter.

Fighting for Access to Abortion for over 50 years. We believe in Inclusive and Intersectional Activism ✊🏻✊🏼✊🏽✊🏾✊🏿 JOIN THE FIGHT NOW!

Given the incoherence of his campaign speeches, I was struck by Hershel’s moving concession speech. It was beautiful in its simplicity. No excuses. Walker showed grace and reaffirmed basic American values our politicians need to show in victory and defeat🇺🇸 https://twitter.com/joenbc/status/1600439901241081857

Our nation has the highest maternal mortality rate of any high-income country in the world, and more than 80 percent of these deaths are preventable.

My Momnibus is the solution to this crisis and Congress must pass it immediately.

Florida NOW’s purpose is to take action through intersectional grassroots activism to promote feminist ideals, lead societal change, eliminate discrimination, and achieve and protect the equal rights of all women and girls.

Learn more about us.